EU rebates have been in the news again this week. Claim and counterclaim abound around the UK’s hard earned rebate and how Scotland’s EU contributions would look under independence.

It’s worth having a look at who contributes what to the EU, and what they get back to try and how the UK rebate figures in all of this. Is it the great deal it’s made out to be?

Like much of the way the EU operates outcomes are the culmination of a series of negotiations and trade-offs between the 28 member states each with their own domestic interest groups to keep happy.

Thankfully data on EU revenue and expenditure by country is available allowing us to see what the numbers look like without the spin.

How does EU funding work?

The structure of EU funding is built on a contribution from each member state based on their GNI (Gross National Income). The money collected is then parcelled out to member states under a number of headings the main ones being Structural funds (which supports investment projects in infrastructure development in various member states), Agricultural Funds (including the infamous CAP), Research funds and Administration.

The overall effect of the agricultural fund allocation has been to significantly reduce the net contributions coming from a number of countries with large agricultural sectors – in particular France. The UK has a much smaller agricultural sector than France and as a consequence found itself contributing a higher proportion of GNI than its neighbour across the channel.

In order to keep these agricultural funds in place – both to keep French agricultural lobbies on side and to ensure long term food supply security within the EU – some horse trading was necessary to compensate the UK and rebalance the net contributions of the large EU states. Hence the birth of the UK rebate.

The important point to note here is that the effect of the UK rebate is to bring the UK’s net contributions back into line with those of France in particular, not to put the UK in any privileged position.

In 2012 France received a total of Eur 8.35bn from the Agricultural Fund, which is some Eur 5bn more than the Eur 3.34bn the UK received.

The UK rebate of Eur 3.8bn (Eur 1bn of which is paid for by France) serves to effectively close this gap.

Once all net contributions are adjusted to take accounts of rebates France puts Eur 8.3bn (0.4% of GNI) into EU coffers and the UK contributes Eur 7.4bn (0.39% of GNI). The French contribution is larger in cash terms due to the fact that the French economy in total is some 9% larger than that of the UK.

The table below shows net contributions (after rebates) for all EU countries, together with the relevant % of GNI.

It also has to be remembered that the UK rebate goes directly to the Westminster government while the agricultural funds go to specific recipients throughout the country.

Current GERS 2011-12 shows Scotland receiving Eur 980m from the EU across all funds.

However, due to Scotland’s current position as only part of a member state it loses out on it allocation of Common Agricultural Policy payments. By 2020 there will be a minimum payment of Eur 196 per hectare. States can negotiate more depending on their position. The UK receives towards the minimum payment. The funds are then distributed within the UK on conditions including the size of farms, with smaller land holdings receiving higher payments. As Scotland has larger average farm sizes Scotland loses out in the distribution of CAP funding. 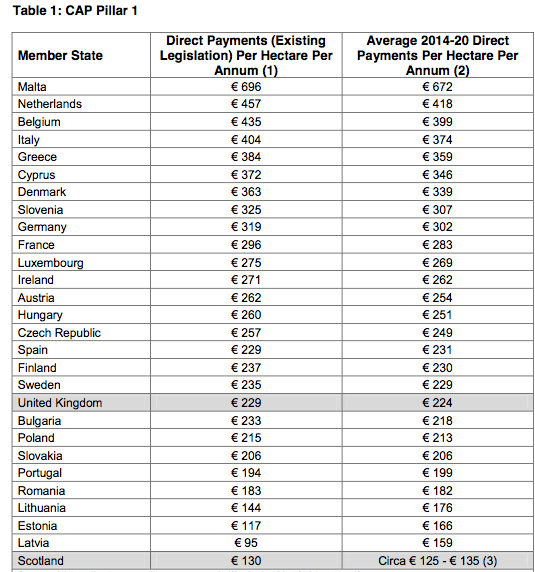 As a result Scotland receives Eur 130 per hectare – the lowest agricultural support for any nation in the EU over 2014-2020. This is the direct result of representation by Westminster rather than by an independent Scotland.

With independence, Scotland would receive at least the minimum of Eur 196 per hectare. The difference this would make to farmers over the Common Agricultural Funding period of 2014-2020 is worth a total of 1 billion euros to Scotland’s agricultural sector. This is the foundation of realising a better deal for Scotland within the EU following a ‘Yes’ vote for independence.