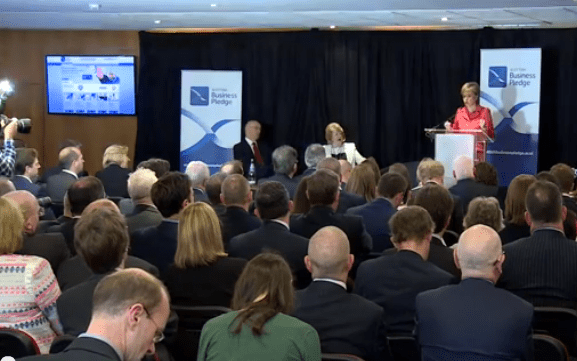 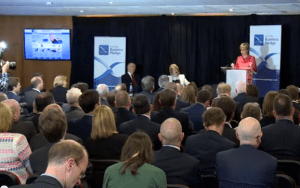 Earlier this week the Scottish Government did a very clever thing, they asked companies to make nine commitments in the form of a business pledge.  The Business Pledge lacked detail and the Scottish Government lacks the powers to add any teeth to the project but nonetheless it sets out an approach to the values and growth behaviours that the government wishes to see in Scottish business.

Critics claim the pledges are heavy on employee engagement, higher wages, gender equality and community involvement. There is even a commitment to this ethereal thing call innovation – what ever that means.  So the detractors have been careful to word their comments along the lines of “its all very well meaning”, “the social ambitions are clear to see” and “there is much to praise in the worthy community based aspirations in this pledge”.  You know the basic stuff you say before the word “BUT” and as my late dad used to say “Everything before the word BUT in a sentence wasn’t worth listening to”.  So once you have cut through the waffle it is clear that the old school business commentators have completely missed the point.

The pledge is a wolf in sheep’s clothing, its not just social, it marks the first steps in a gradual deployment of a balanced approach to economic growth and there is steel in those pledges. The business pledge marks the emergence of a new fairer scandinavian influenced growth strategy – lets call it Scotianomics. Innovation isn’t ethereal it is the key to improving productivity and one of the three keys (innovation and productivity, empowering SME’s and improving shared prosperity) to achieving rapid economic growth. So it’s good to see raising wages and setting the right conditions for the SME sector to thrive in there as well. The worst thing about a wolf is it’s bite and having set out a vision of how companies should behave to balance the welfare of the people with faster economic growth the bite is that the Scottish Government is not being given the vital economic tools needed to implement this vision that everyone, even the SNPs critics have just applauded. That amounts to a challenge to Westminster to vote down to powers we ned to implement this strategy for prosperity.

Hearts owner Ann Budge the first to sign the pledge

The pledges include the Living Wage, boosting the spending power of the economically excluded, generating more taxes and saving on welfare will generate billion pound benefit to the Scottish economy.  If the UK Government’s Low Pay Commission sets a minimum wage below the level at which people can afford to work full time and not go into debt for basics such as rent, heat and food then they are not doing their job properly.  Those of an overly free-market disposition who want the market to set the minimum wage and want small government are campaigning for an oxymoron.  You can’t have low pay and small government, for when people can’t afford to eat when working full time then Government has to pay out more welfare, hence you get big government.

Innovation is the key to improving productivity and to kick starting economic growth. Scotland lags approximately 3% behind the UK average in productivity terms but up to 40% behind comparable economies such as Norway’s, and significantly behind other northern European economies such as Belgium, Ireland, The Netherlands and even larger nations such as Germany and France. Scotland spends 1.25% of GDP on R&D. The faster growing, more prosperous smaller European nations spend an average of 3.4%. According to the innovation think tank NESTA building towards an R&D spend of 3.4% of GDP over a five year period would mean that Scotland’s economy would grow by around £12bn a year.

If there is going rapid growth to be found in Scotland economy then it is from our SMEs, the smaller to medium sized enterprises, mostly small and entrepreneurial that create the majority of added value employment in Scotland.  Germany has big name manufactures but its wealth is driven by the core of manufacturing and exporting SME’s known as the Mittelstand.  SMEs make up 99.3% of Scotland’s businesses, employing 1.1million (54.7% of all private sector employment). But despite generating 36.7% of private sector turnover, the SME sector main barrier to growth is cashflow, margins are tight borrowing is light and late payments weighs heavy on small business. Business for Scotland have lobbied successfully for prompt payments to become Scottish Government policy and its good to see prompt payment as one of the pledges.

Another pledge is responsible use of zero hours contracts.  Thats a good thing because initially pledging to end zero hours contracts was a key mistake for Labour in the last election – hence the later addition of the word “exploitative.  Zero hours contracts in some circumstances are mutually beneficial for both employees and employers but they have become overused in an overly free-market sort of way so it is now right to outlaw exploitative and exclusive contracts but lets not punish the single parent who can arrange family childcare cover when she gets called in to do the occasional cover shift.

I would have liked to have seen sustainability as a stand alone commitment, green business is an important opportunity for Scotland especially with our comparative national expertise in energy production but it just sneaks in under the community engagement pledge.

Now David Cameron has said that Scotland will have one of the most powerful devolved parliaments in the world. There are however regional assemblies, councils and state governments all over the world that have powers that Cameron doesn’t want the Scottish Parliament to have – they just don’t use the word parliament if they are not going to offer parliamentary level powers.   As one leading Scottish business person said to me last week “North Dakota will have more devolved powers than Scotland”.  American states can vary sales tax for but Scotland wont be able to vary VAT for key sectors such as tourism as 21 of 28 EU nation tourism competitors have.

So the Business Pledge really paints a vision of the kind of prosperous, growing, fairer economy that Scotland would be able to create if Westminster were not to retain vital business powers such as corporation tax, which could be used to provide targeted tax incentives to encourage the key growth behaviors.  We will also lack control over crucial employment and welfare laws, including the ability to set the minimum wage or vary National Insurance thresholds to make the Living Wage more affordable for employers. I buy into Scotianomics maybe one day the rest of the UK will join us.

Business for Scotland, the campaigning business network – Join us now