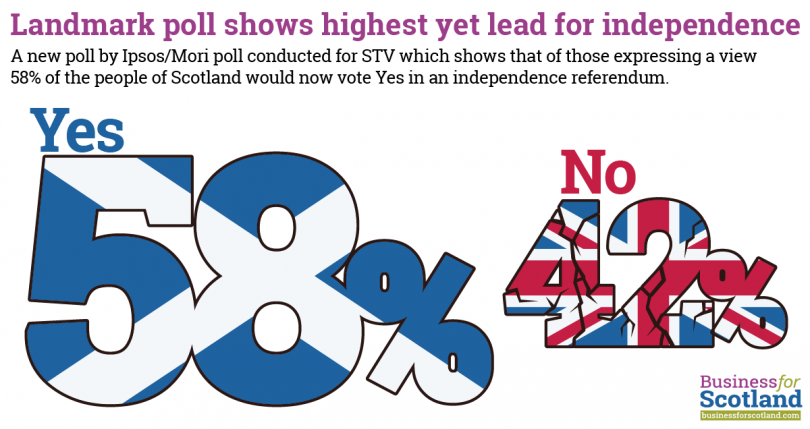 A new poll by Ipsos/Mori poll conducted for STV which shows that of those expressing a view 58% of the people of Scotland would now vote Yes in an independence referendum.

This poll represents a new record for independence support of 3% higher than the Business for Scotland Panelbase poll that found 55% Yes in September and 2% higher even than the leaked result from the poll carried out by the Cabinet Office for the UK Government.

Significantly this is the first poll to have support for the union at a lower number than the Yes vote of 2014. The Ipsos MORI poll for STV News found just 42% back staying in the union.

The Poll also suggests the SNP will secure a Holyrood majority in next year’s Scottish Parliament election, with 58% of voters planning to back the party in the constituency vote and 64% say the UK Government should therefore grant a section 30 order for a second independence referendum within the next five years.

Back in January when we launched the Believe in Scotland campaign we predicted 55% Yes by summer 2020 and we have recently set a target of 60% Yes by the end of January 2021 and the end of the Brexit transition period.  That 60% now looks very achievable even to those that doubted our target.

Another poll published today by Progress Scotland states that 75% of Scottish voters would support independence with the right economic message.  We now need to get that message right and that can only mean a Wellbeing led economic approach that will carry voters from both the left and the right of the political spectrum.  The Yes campaign now needs to be as much about nation-building as it is about winning independence.