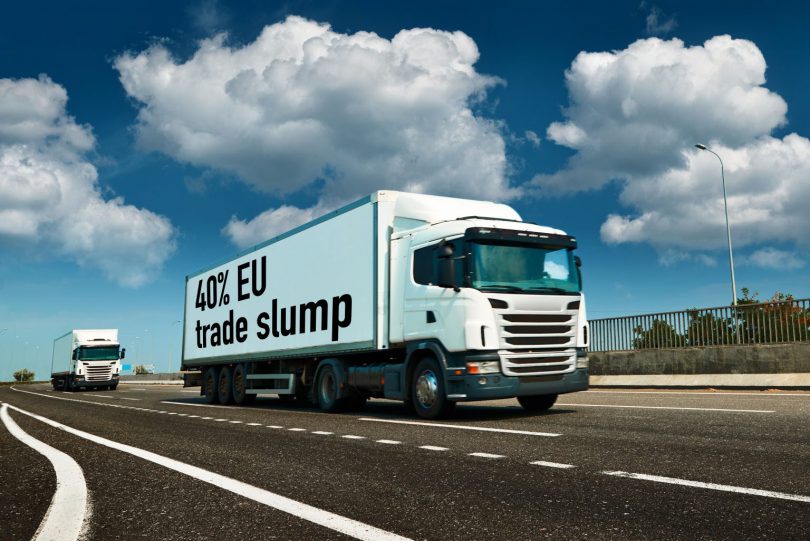 Boris Johnson’s dismissal of post-Brexit chaos as ‘’teething problems’’ has been revealed as nonsense by official trade figures showing a huge slump in exports to the EU and a new survey which reveals three out of every four British manufacturers have experienced Brexit delays.

Britain’s exports to the EU slumped more than 40 per cent in January, according to figures published today by the Office for National Statistics. In the same month, imports from the EU fell by 28.8 per cent compared with December.

The combined monthly decline in Britain’s exports and imports was the largest since comparable records began in 1997.

Figures from Germany earlier this week showed that imports from the UK had fallen by more than 56% to €1.6bn (£1.4bn) in January from the same month a year ago amid Brexit disruption.

Meanwhile a new survey has revealed the full effects of Brexit on British manufacturers. It shows three in every four manufacturing companies have suffered from delays since the Prime Minister’s disastrous Brexit ‘deal’ took effect on January 1.

They have had to deal with an avalanche of new paperwork and a huge increase in red tape, ranging from tax and customs documentation to new health checks.

The new survey shows that almost a third of firm suffered delays of between one and two weeks and more than half saw their costs rise as a result of Britain’s departure from the European Union’s single market.

More than half of companies said they were suffering from increased costs. More than a third had lost sales

The Scottish fishing industry has been particularly badly hit by Brexit, with fish left rotting in lorries unable to get fresh produce to markets in time. Industry bodies have warned that companies are being pushed to the brink of bankruptcy and have estimated losses at more than £1m a day.

The new survey confirms that food producers have been particularly hard hit because delays mean their shipments are at risk of being rejected by clients but the effects are wider than that.

Companies in all manufacturing sectors, particularly small firms, have struggled to cope. More than half of companies said they were suffering from increased costs. More than a third had lost sales, while future business was being lost because of fears over continued disruption.

Pressure is mounting on the Westminster government to help tackle the problems but rather than act decisively it has preferred to play down the problems.

“Of course there are there are teething problems in lots of areas and that’s inevitable because this is a big change,” Prime Minister Boris Johnson said when asked about the problems faced by the fishing sector on a visit to Scotland towards the end of January.

But ”teething problems” go nowhere near describing the scale of the problems which have since emerged.

Stephen Phipson, chief executive of Make UK, which carried out the most recent survey, said: “Government should look to quickly get back around the table with our EU partners to find a way to mitigate against ongoing delays at the border and iron out different interpretations of the rules for movement of goods in separate member states.’’

He urged that the training of customs officials and help with customs paperwork should be accelerated.

The EU accounts for almost half of UK imports and exports, while the government’s own analysis suggests that trade deals outside the EU will not make up for the impact of Brexit on the UK economy.