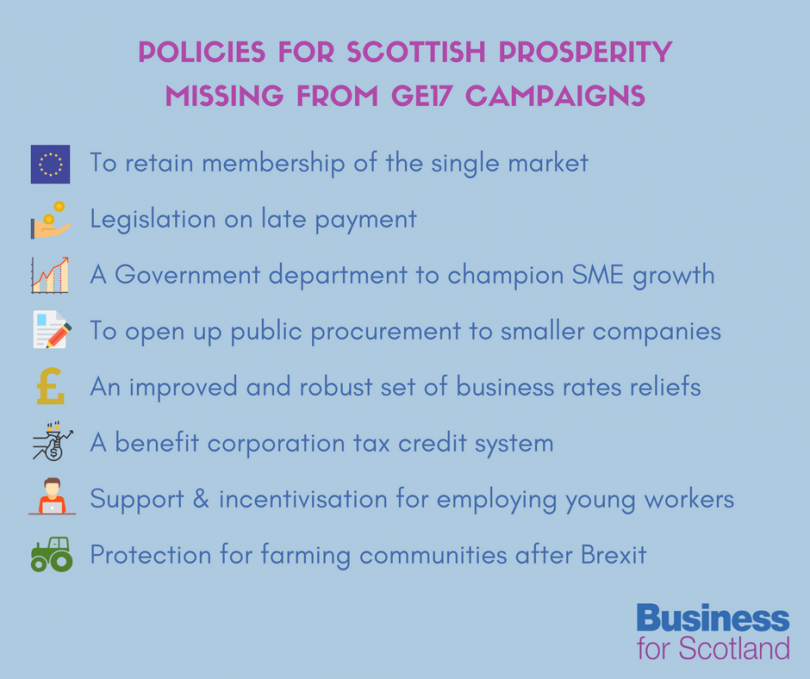 SMEs across the UK have been ignored in this snap general election, where the focus has been on a hard Brexit rather than policies that would help this key business sector and enrich our economy.

Key business issues such as late payment legislation and boosting SME growth have been lost in the rush to the polls, and business owners want to see specific SME focused business growth policies implemented after Thursday’s vote.

Business for Scotland polled members on priorities for a “business manifesto”, and the results are clear, business owners want to see:

BfS CEO Gordon MacIntyre-Kemp said: “It is only through a balance of social protection and wealth creation that a shared prosperity can be created.

“SMEs form the backbone of Scotland’s economy and represent the bulk of Scotland’s future jobs growth potential. Big corporates are in the main part profit takers, but SMEs are the prosperity makers. Scotland’s SMEs are our primary drivers of economic growth and job creation and so their needs should be the key focus of business policy and they absolutely need single market membership to thrive.”

Business for Scotland consulted members and they told us which policies they would prioritise. Over the coming weeks and months BfS will add more details to these policies and seek to influence both Scottish and UK governments to refocus business and economic policy away from large corporates that are largely profit takers towards SMEs, the wealth creators.

BfS members’ top priorities for the governments of both the UK and Scotland are:

There are two key priorities for boosting SME growth – Small Business Commissioner’s Office for Scotland but with a wider remit than the UK Commissioner to offer greater support for SMEs in conflict resolution around payments and contracts and/or a Dedicated Minister for SME Growth with powers to tackle late payment and increase SME participation in public sector procurement. Holyrood should create a policy and demand any extra powers required to empower such a ministerial position.

Remain in the single market

To support the Scottish Government’s efforts for Scotland to maintain membership of the single market and customs union.

Raising basic Corporation Tax to 22% with up to 7% targeted tax credits available to firms increasing youth employment, increasing exports, investing more in close to market R&D, reducing emissions, hiring and training more young people, paying the living wage etc. Our initial scoping work demonstrated that this could save more than £1bn in benefits payments and generate more than £12bn in additional GDP for Scotland over five years.

Simplify public sector procurement by removing the burden of bureaucracy that makes bidding more difficult for SMEs. The cost and effort required to bid for public contracts creates an uneven playing field and favours bigger companies and multinational rather than local SMEs suppliers.

The EU provides 50% funding for many skills and employment based schemes offered to SMEs by Scottish councils and this is under threat from Brexit. It is vital that we increase incentives for companies to train and recruit younger employees through apprenticeship style schemes with more of an emphasis on targeting incentives to where skills shortages exist in traditional trades, transportation and skilled manufacturing jobs.

A graduate business start-up programme focused on retaining young talent in Scotland could include a redeemable voucher for all graduates of Scottish universities to help them return and establish a business in Scotland within ten years of graduation.

Rural Scotland’s SMEs and farming communities need protection from Brexit more than any other sector. Without EU subsidies as much as 60% of Scottish farming business operate at a loss and if these subsidies are not matched post Brexit then not just farm businesses but the communities they support will be bankrupted by a Brexit that business people in Scotland resoundingly rejected.