Scotland’s strong food and drink exports are an important asset

Food and drink produce is a growing part of Scotland’s economy. This sector has high levels of turnover, employment and global exports. It also contains many companies based and owned in Scotland.

Overall turnover in the food and drink sector grew past £13 billion in September 2013. 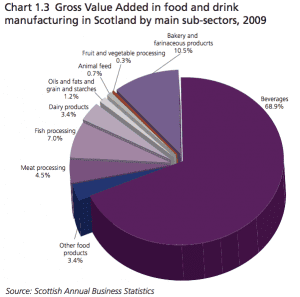 The target of reaching £5 billion in exports was met six years early. There is now a target to reach £7 billion in food and drink exports by 2017. 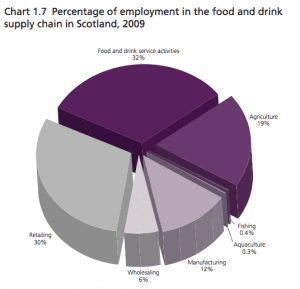 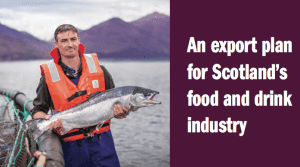 Mark Laing, chairman of Nairn’s in Edinburgh, said: “Exports are a key part of our business. We currently export to 30 countries around the world and have experienced the benefits from this, but we know there are many more potential opportunities out there.

“It’s great to see Scotland’s food and drink sector coming together as one to lay out a plan for the industry as a whole.”

The full export plan from Scottish Enterprise can be read here.

It states that small, medium and large companies can contact the scheme to A) find out what export markets suit their business, B) help understand how export markets operate, and C) connect each business to domestic and international networks to promote their business.

Scottish Development International has offices in Scotland and in 27 offices across the world. Examples of the benefits of this network include: raising awareness of Scotland’s premium seafood and salmon with industry leaders in Asia; supporting Scottish business at Anuga (the world’s leading food fair in Cologne) and at  Seafood Expo Global in Brussels.

The export plan also states that the lesson from Scotch Whisky is “a drive to succeed and an unflinching commitment to quality”.

The growth of Scotland’s food and drink sector is focused on quality produce at the heart of its global branding.

Would Scottish independence provide greater opportunities for the food and drink sector?

1) In terms of promoting exports, the food and drink sector would benefit from the expansion in Scotland’s international representation and links.

A dedicated Scottish trading and investment network would provide greater capacity for Scottish Development International. Currently SDI has just over 240 staff in Scotland and its 27 global offices. Page 13 of Scotland’s Future proposes that an independent Scotland will have between 70 and 90 embassy posts at a yearly running cost of £90-£120 million. Scottish Enterprise only had a £18.6 million budget for ‘Internationalisation’ in 2013. (page 49)

This extra resource will be found from Scotland’s current contribution to UK embassies and UK Trading and Investment. Business for Scotland found that UKTI was failing to promote Scotland’s goods and services in key markets last St Andrew’s Day.

As Andrew Fairlie,  star chef at Gleneagles Hotel,  said  “The Scottish Government has also been a big supporter of the food and drink sector and has been instrumental in helping companies explore new markets such as India, China and South America…with independence, we could achieve much more.”

2) An independent Scotland will have full powers over taxation, employment and research and development support. It’s clear that Scottish governments of all parties are committed to supporting the food and drink sector with the power held in Scotland. With the full powers of independence, more can be done to engage with Scotland’s businesses and ensure that they can grow and succeed. 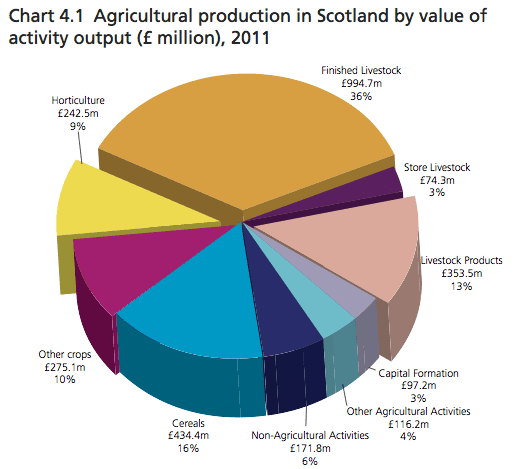 4) Independence is a unique opportunity to boost Scotland’s brand recognition on a global scale. This has been recognised within the food and drink sector. David Macfarlane, former White House chef, said:

“A Yes vote will generate a massive boost for Scotland the brand, and generate interest in Scottish culture around the world. We just need to make sure that modernising our food is part of our strategy as an emerging new country.”

Chef Albert Roux, who has a 3 Michelin star restaurant, said that  “the Westminster government has been lamentable over the years in selling it as a place of exquisite beauty with world-class-quality natural produce. I am not political but as an observer all I can say is we have never been better served than by the government we have. Since the present (Scottish) government took power, there has been a big change for the better in terms of selling Scotland to the world.”

5) On a practical level, Scotland will have more control over what happens in the food and drink market. Scotland has already taken a distinctive role in developing an autonomous food standards agency. The levy income from livestock – for instance – will stay in Scotland after independence. In these areas, control at a Scottish level will allow institutions to be responsive and flexible to the needs of key organisations in Scotland. Control over regulations close to home means that the system will be responsive and easier to access for companies and consumers in Scotland.

Frances Barron, who is the Managing Director of a food business in Ayr and member of Business for Scotland, said “As an owner of a growing food business in Scotland I am positive that our food and drink profile across the world can be enhanced by Scotland gaining independence.

I am excited at the prospects which independence will bring for my industry and already proud of the work being done by the Scottish Government and associated industry bodies in assisting and supporting SMEs like my company, not only to export but to break into domestic markets.”

The food and drink sector is an important part of Scotland’s unique economic strengths. With popular goods and a supportive environment, it is making progress in the global market. It is part of a clear picture: Scotland has what it takes to succeed as an independent country.

Yet gaining the full powers of independence isn’t only about prosperity. It’s about opportunity. Boosting support for exporters, supporting businesses in Scotland, benefiting from a better deal from the EU, improving Scotland brand recognition and having access to a responsive regulatory framework are the benefits of independence. This will mean that businesses in Scotland will have the full and effective backing of a government who will be accountable to the people of Scotland.