Fearmongering and uncertainty were the main/only weapon of the No campaign in 2014 but Brexit is an unexploded a time-bomb of uncertainty.  Until Article 50 is enacted and negotiations are underway and the Brexit fog has lifted, potential no to yes vote switchers (N2Ys) can’t answer the constitutional question. As much as 20 per cent of the No vote could be persuaded to switch, but before that happens they will need answers to the following questions, to which I will suggest the most probable answers in brackets.

1. Can Westminster really do a trade deal that will be beneficial without the EU fees and immigration? (No).

2. What will the border with England look like and how will that effect trade? (Depends on the Brexit trade deal but it is most likely that there no hard border as promised by the UK to Ireland).

Can Westminster really do a trade deal that will be beneficial without the EU fees and immigration? (NO)

3. Will Theresa May cave in and ask the EU for a soft Brexit? (No).

4. Would the EU accept a soft Brexit or say “No, either you accept the four freedoms or you are out of the single market”? (They would say no as there is no such thing as a soft Brexit.  The EU could cease to exist if they agreed to that).

5. If a soft Brexit was on the cards, will Eurosceptic Tories resign and Ukip support surge, thus throwing the UK into political and constitutional chaos? (Yes almost certainly).

6. As a hard Brexit gets closer will the economic damage we have seen since the Leave vote get worse? (Yes and worse still after the UK actually leaves the EU).

7. Throughout the Brexit process which government UK or Scottish looks the most competent and trustworthy? (Scotland’s so far and I would expect that to continue). 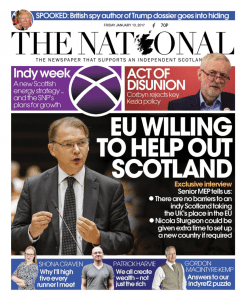 Scotland would be granted continuer nation status by the EU

8. What is the EU position on an independent Scotland? Would an independent Scotland automatically retain EU membership? What opt-outs, the Euro/Schengen would we have and what would it cost? (We don’t know but the EU will probably say we can retain membership and inherit all opt-outs but we will need EFTA to fall back on if that is not certain by the time of the vote. This would bring the pro-EU N2Y switchers on board and also be acceptable to the small number of anti-EU Y2Ns) Edit: The National’s headline today quotes a senior EU figure stating that Scotland would be granted continuing state membership rights.

9. Would EFTA want Scotland as a member and would that be better for Scotland than full EU membership if rUK leaves the EU with a hard Brexit? (Yes, and it is a credible alternative to full membership that is preferable to no single market access.  It would depend on the Brexit deal but EFTA almost certainly wouldn’t want the rest of the UK to join as the rUK would be too big and unbalance the organisation).

10. Do the SNP and wider Yes campaign have a credible, well-thought-through prospectus for greater economic prosperity and for creating a better nation with the powers of independence than the chaotic post-Brexit UK can offer? (They will have to present one before indyref2 is called).

We won’t fully know the answers to these questions until Article 50 is enacted and both sides set out their negotiation red lines and then possibly not till after several months of negotiations. So the earliest a referendum date can reasonably be announced is the third quarter of 2017 and the two probable dates for the referendum are May or September 2018.  If the above questions are answered in the way suggested, then there is a good chance that Yes will start the campaign with majority support.